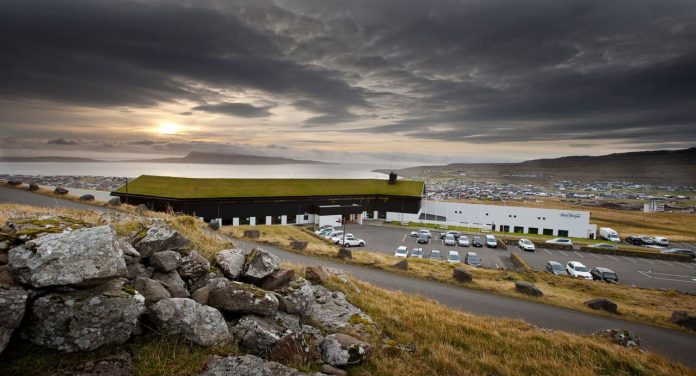 The Faroese uncrowded hotel king, Johannes Jensen, will more than double the number of rooms in his three hotels over the next few years.

In Torshavn, Hotel Føroyar expanded its capacity from 106 to 129 rooms on April 1, 2018. By 2020, there will be another 66 rooms, which have just begun to build. Once in use, there are expansion plans for even more rooms, so the total number of Hotel Føroyar comes to 223 rooms. A special feature is that in the future there will be several disabled rooms.

Today the hotel consists of two buildings, the main one with 106 rooms and 23 rooms in our annex.

The extension at Hotel Føroyar takes place both east and west on the outskirts of Torshavn. For the sake of the surrounding environment, it becomes a true copy of the existing buildings.

Hotel Føroyar was inaugurated in 1983. The hotel is located on the hillside above Torshavn. The rooms are spread over two floors, from which there is an excellent view of the Faroese capital and the neighboring island Nólsoy.

Hotel Føroyar has four suites. One is called Clinton Suite after former US President Bill Clinton, who has both slept and eaten in the suite. Another is called Prime Minister’s Suite and the last two are Wedding Suites.

The hotel lived for the first few years a changeable life with changing directors, but since Johannes Jensen came in 2002, the development has taken off.

Johannes Jensen also runs Hotel Torshavn, which in 2022 also planned an extension, from 43 to 122 rooms.

Finally, there is the Hotel Vágar with 25 rooms near the airport on the western island of Vágar.

Johannes Jensen, who is also chairman of the board of the “Visit Faroe Islands”, says that even more hotel rooms are essential, because the number of tourists in the Faroe Islands is increasing significantly. In 2018, the tourist industry will convert approx. NOK 700 million, and the goal is to reach a billion Danish kroner in 2020.

Tourism is important for the Faroe Islands economy, and Johannes Jensen expects it to become more and more important:

“We believe there is great potential for increasing the number. We have a global ambition to put the Faroe Islands on the world map to an even greater extent,”he says.

And he is convinced that this is possible. Many problems are cleared of the road. The flight capacity has grown considerably, the number of seats due to more and larger aircraft, and competition has now come on the route.

Compared to other and larger countries, there are not so many locals among the hotel guests in the Faroe Islands. Few people need to stay overnight, as it is a small community, well developed with bridges and tunnels.

In Germany, the locals – the Germans – constitute approx. 50-60 percent of the guests of the hotels, in Denmark it is about half, while in the Faroe Islands it is approx. 20 percent.

Airbnb – that is, online rental of private homes for accommodation has great success in the Faroe Islands.

“Of course, this gives great competition, but we know that many people often use Airbnb because they cannot get a hotel room,” says Johannes Jensen, who has no doubt that many more hotel rooms are needed than there are in day. He therefore welcomes the fact that others are also involved in extensions.

On the question of why, as a tourist, you should just choose the Faroe Islands, when you can get more and more nature for the money in Iceland or Greenland, the answer is clear: It is more authentic and intimate in the Faroe Islands, here you are quickly in closer contact with nature, and here people are closer to each other.