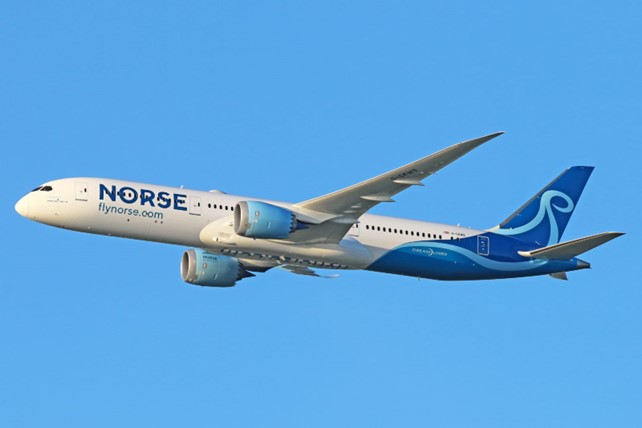 The long-haul low-cost carrier, which will operate its first flight next week between Oslo (OSL) and New York John F Kennedy (JFK), intends to launch its initial services from the German capital in August.Two routes are being opened, linking Berlin Brandenburg (BER) with New York JFK and Los Angeles (LAX). The JFK service will start on Aug. 17 be daily. Flights to LAX will be launched on Aug. 19 and operate 3X-weekly. Norse is an all-Boeing 787-9 operator.Berlin will become the third destination in Europe to be served by Norse alongside Oslo and London Gatwick (LGW). From Oslo, the airline will fly to JFK from June 14, Fort Lauderdale (FLL) on June 18, Orlando (MCO) on July 5, and LAX on Aug. 9. Its first LGW route to JFK opens on Aug. 12.

Norse will compete in the Berlin-New York market with United Airlines, which launched a route to BER from Newark (EWR) in March. The US carrier currently operates the sector daily onboard 767-300s.

Norse was founded by CEO and major shareholder Bjørn Tore Larsen in March 2021. The airline has a fleet of 15 787s—four of which have been subleased to Spanish carrier Air Europa.

Speaking at Routes Europe 2022 in Bergen, Larsen said there is a huge opportunity for low-cost transatlantic flights between Europe and the US, filling a void left by the exit of Norwegian Air Shuttle. And he believes Norse can do it in a profitable way.

Larsen said: “Everybody knows that starting an airline is close to insanity and it’s at least a very good way of losing a whole lot of money. But still, I think there is an entry point where it could be attractive if you execute it properly. For us, I’m convinced we can execute it in a manner that will satisfy our customers and be profitable.”

When asked where he sees Norse in five years’ time, he added: “I only have one ambition now and that is not to go bankrupt. But I hope we are at least a 50-aircraft airline and maybe more.”