Home News Boycot of Trump hotels on the way 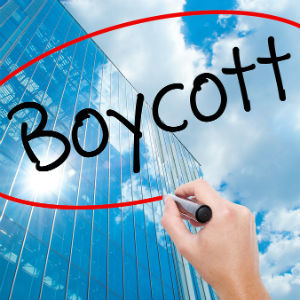 The parent union of the Culinary Union which is certified as the bargaining representative of workers at Trump Hotel Las Vegas, has called for a national boycott of businesses Donald J. Trump owns, has invested in, or has partnered with until the Trump Hotel Las Vegas honors its legal duty to bargain with the union.

The #BoycottTrump campaign urging customers to not eat, sleep, or play at many Trump hotels and golf courses comes in the wake of federal officials’ denying Trump Hotel Las Vegas’ objections to a December 2015 union election, during which the majority of workers at the hotel voted to join the Culinary Union, the largest affiliate of UNITE HERE.

Union members recently picketed at Trump National Golf Course Los Angeles, announcing the boycott from inside the clubhouse restaurant, and union locals have planned further boycott events in Waikiki and San Francisco, in Chicago.  More actions are expected to follow in Virginia, New York and Florida.

“Enough is enough,” said UNITE HERE President D. Taylor. “While Donald Trump waged an indefensible anti-worker and anti-immigrant presidential campaign, the workers at his Las Vegas hotel fought for dignity and respect in their workplace. They voted to unionize, they won, and now the law says Trump must negotiate.”

Prior to the boycott call, thousands of union members and supporters have demonstrated outside Trump Hotel Las Vegas. “Donald Trump’s a disrespectful hypocrite, and we stand in solidarity with the workers at Trump Hotel Las Vegas,” said AFL-CIO President Richard Trumka. “His unwillingness to bargain with the hard-working people who make his hotel successful is shameful. It tells you all you need to know about his feelings toward all working people.”

“At the hotel in the morning we chant ‘No Contract, No Peace! No Contract, No Peace!” said Eleuteria Blanco, a guestroom attendant at the Trump Hotel Las Vegas. Over 57,000 union workers in Las Vegas have fair wages, job security, and good health benefits—in stark contrast to workers at Trump Hotel Las Vegas who pay up to $260 per month for their health insurance, and are paid approximately $3.00 less per hour in comparison to union workers on the Strip. “We’re not second class workers,” Blanco added.

“After a disgraceful anti-union campaign against their own workers, the hotel still refuses to negotiate with their employees,” said Geoconda Arguello-Kline, Secretary-Treasurer for the Culinary Union. “We call on allies and workers to stand in solidarity in a national boycott until Donald Trump, the ‘Great Negotiator,’ comes to the table.”

The Culinary Union is Nevada’s largest immigrant organization with over 57,000 members – a diverse membership that is approximately 55% women and 56% Latino. Members -who work as guest room attendants, bartenders, cocktail and food servers, porters, bellmen, cooks, and kitchen workers- come from 167 countries and speak over 40 different languages. The Culinary Union has been fighting for fair wages, job security, and good health benefits for working men and women in Nevada for over 80 years.