Home News Check in via face to hotel 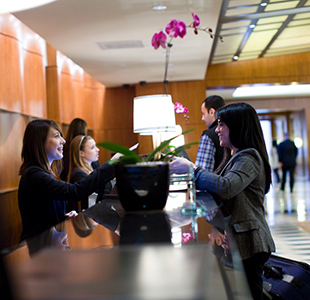 Checking in to a hotel can be a laborious process involving hotel staff manually examining travel documents but a new automated system under way here promises to get guests their room keys much more quickly.

The system – called E-Visitor Authentication (EVA) – will help do away with those manual processes and reduce hotel check-in time by up to 70 per cent.

The EVA system launched on Wednesday (Nov 6) involves guests using a mobile app or a standalone kiosk to scan their passports using facial recognition technology similar to that employed at airports.

A guest’s data will also be sent to the Immigration and Checkpoints Authority (ICA) to verify the validity of their stay.

Once this is done, the guest gets the room key.

Senior Minister of State for Trade and Industry Chee Hong Tat announced the initiative at the Hotel Industry Conference 2019.

Mr Chee told the event: “Today, hotels have to deploy staff at check-in counters to check passports to confirm that the individual’s face matches the passport photo, and to verify that they are in the country legally.

“Some hotels have implemented self-check-in kiosks with facial recognition technologies to automate the first task, but not the second. With EVA, both tasks can now be automated.”

He noted that the reduction in check-in time will translate to more than 11,000 hours saved annually for a large hotel while also freeing up front-office staff so they can spend more time engaging guests.

The new system is already being piloted at three hotels – Ascott Orchard, Swissotel the Stamford and Grand Park City Hall.

Mr Marcus Hanna, the general manager of Fairmont Singapore and Swissotel The Stamford, said the system has helped to eliminate large amounts of paperwork while enhancing productivity and efficiency.

“In the past, there used to be long queues behind counters with colleagues manually helping to process guest check-ins. Now, technology has made possible the completion of check-in in about three minutes and check-out in less than 30 seconds for each guest,” he said.

Interested hotels can contact the Singapore Tourism Board (STB) to find out how they can introduce the system.

The Hotel Industry Conference also featured 18 new concepts that aim to drive productivity in the industry.

These were devised in response to this year’s Hotel Innovation Challenge, which called for crowdsourced ideas to address key issues in housekeeping, human resources and data management.

The featured concepts include a manpower scheduling solution that effectively rosters employees based on their skill sets and demand and a peelable cleaning formulation to reduce cleaning time and water consumption.

Singapore has more than 400 hotels with 67,000 rooms. Total gazetted room revenue rose by 1.7 per cent to $1.9 billion in the first half of this year, according to the STB.

Visitor arrivals increased 1.3 per cent to 9.3 million in the same period although tourist spending fell 3 per cent to $13.1 billion compared with the same six months last year.

Mr Chee said that while concerns about the global economy and geo-political tensions have affected Singapore’s overall economic growth, the hospitality industry must continue to transform. “We must press on with the tripartite efforts to strengthen our industry capabilities and upskill our workforce.”

“These will also put us in a better position to tide over challenging times and seize new opportunities when the economy recovers.”

The Infocomm Media Development Authority in partnership with the STB and SkillsFuture Singapore launched the Hotel Industry Digital Plan (IDP) on Wednesday as a way of helping hotels move to more digital operations.

The Hotel IDP, a free resource, provides hotels with an easy-to-use, step-by-step guide on what digital solutions to adopt at each stage of their growth. It also includes a training road map to ensure staff are adequately prepared to adopt digital solutions.

Mr Chee noted that technology is not meant to replace employees but to help them increase efficiency: “The aim is to enhance the capabilities of our workers, so that they can take on higher-value roles which are more productive and earn better wages over time.”