Home News What happens when someone dies on a flight 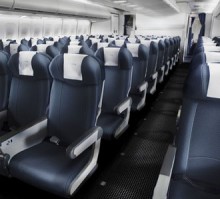 Medical emergencies in-flight are, unfortunately, not an uncommon occurrence. Flight crews are well trained in CPR and have access to medical equipment that is usually sufficient enough to at least stabilize someone who has fallen ill onboard. So what happens, then, when a passenger is beyond our help, and the person sleeping in 13C is actually taking a much longer nap than anticipated?

To start with, flight attendants are not doctors, so we can not pronounce someone dead, even if it’s pretty obviously the case. Our first priority, of course, is to revive the person if we can – even DNRs (Do Not Rususcitate). We perform CPR and use the onboard AED (automated external defibrillator), as well as attempt to solicit any assistance from onboard medical personnel with current credentials. In addition, we have the pilots contact MedAire, which is a center staffed 24/7 with physicians on call for emergencies. The MedAire physicians can instruct us on care for the passenger, including use of the emergency medical kit, which contains more complex equipment and medication than our regular first aid kits. Diverting the aircraft usually is necessary to get the passenger to a hospital, but sometimes this is impossible to do – for instance, because the aircraft is over water and has nowhere to divert to. Most airlines’ policies state that CPR can only be stopped if there is a licensed physician or coroner to pronounce the person deceased, the cabin becomes unsafe for those performing CPR to be out of a seat, the crew is too exhausted to continue, or life saving procedures have continued for at least 30 minutes to no avail

Procedures vary from airline to airline, but are generally similar for the handling of a dead body should the flight continue on without diversion and the person not successfully revived. Preferably, the deceased passenger is placed across a row of economy class seats or reclined in a business or first class seat with a blanket pulled up to the chin. Sometimes, however, it is not possible to return the body to a seat. The toilets are usually not option for placing a corpse, both out of respect and because, when rigor mortis sets in, the body will be so difficult to remove that it will require dismantling the lavatory to get to the poor soul. So if a seat isn’t an option for the body, then it’s into the galley with him – without obstructing any doors, that is. Some airlines have even taken the possibility of in-flight death into consideration with regard to cabin configurations, such as an on-board “mortality kit”, containing items such as body bags, absorbent liner, and body tags.

After ceasing life saving procedures, it’s hard to imagine keeping a stiff upper lip (yes, pun intended) and carrying on with a flight, but of course, we as airline crew ultimately want to avoid calling attention to the perished passenger and causing alarm if we can. According to a British Airways cabin crew trainer in the BBC documentary A Very British Airline, the former method of disguising a passenger resting in peace was to buckle the person into a seat, put on an eye mask, throw a gin and tonic on the tray table alongside a newspaper, and say he’s “resting comfortably.” (I was also told to say this line in my training class many years ago, in the unlikely event we stopped CPR.) The gin and tonic treatment is no longer practiced at BA.

Statistics are hard to find on just how many people die onboard commercial aircraft annually, as the FAA and other organizations do not require the collection of such data. But, informally, several of my flight attendant friends have dealt with someone passing away on flights they’ve worked. This still isn’t to say it’s a commonplace situation, but it’s one we have to be prepared for nonetheless. So, if you see someone napping next to you the next time you fly, a warm gin and tonic diluted by long-melted ice on the tray table and an unmolested Daily Mail on his lap, just hope he can’t handle his alcohol, and don’t give it another thought.