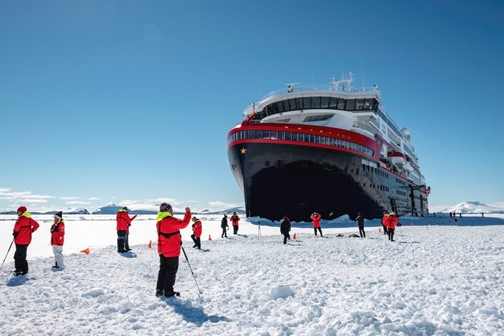 August 8, 2022, marks the start of the epic 93-day adventure on board battery-hybrid powered MS Roald Amundsen. This is the first of two new pole-to-pole itineraries, with MS Fram setting sail for an epic 66-day expedition cruise from the Arctic to Antarctica a little over a month later.

The two new itineraries will encompass several bucket list destinations and experiences, including some of the world’s most beautiful and remote places in Antarctica, Canada’s Northwest Passage, the Chilean Fjords, and Greenland, as well as crossing through the Panama Canal. 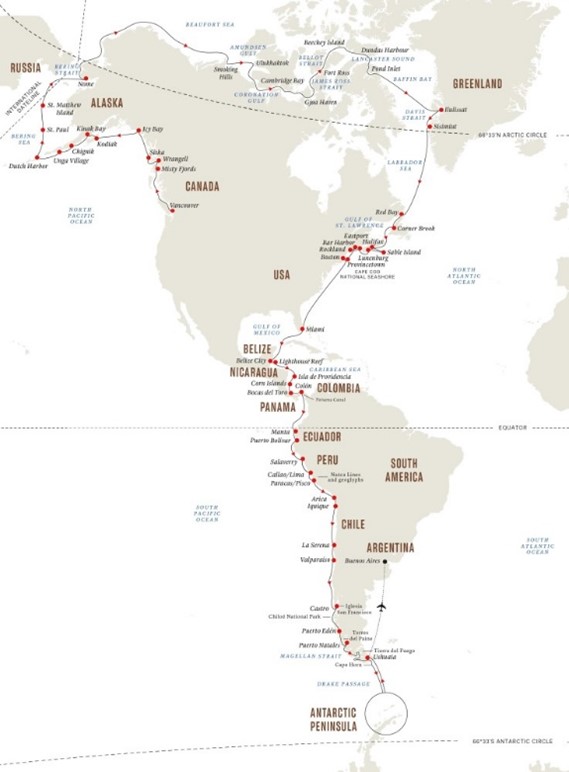 The 93-day itinerary departs Vancouver on August 8, 2022 and will visit 11 countries – and Antarctica – before disembarking adventurous guests in Buenos Aires.

The expedition cruise will be with the MS Roald Amundsen, which is not only the world’s first battery-hybrid powered cruise ship, but also fittingly named after the first explorer to successfully reach both the North and South poles, as well as the first person to navigate through the Northwest Passage, which he did in 1903.

The vast voyage includes the rarely visited Aleutian Islands along the Alaskan Peninsula and the deserted St. Matthew Island, the most isolated place in Alaska, before crossing the Artic Circle and heading through the fabled Northwest Passage to Greenland and Baffin Island.

Along the journey towards The South, unique stops include Belize and Nicaragua before the Panama Canal and exploring the majestic South American coastline.

Full itinerary can be found here. The exclusive itinerary starts at $64,581 per person.

Between the Poles: The Epic Global Expedition Cruise – The 66-day alternative 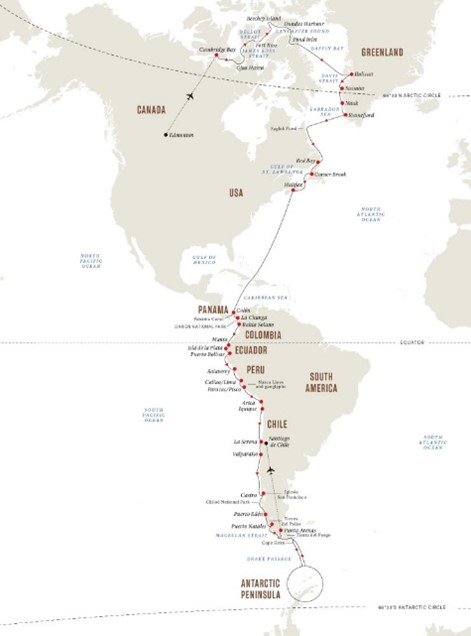 The MS Fram will take guests through the Canadian Arctic to Greenland, before heading south, through the Caribbean, the Panama Canal, exploring the coast of South America, and do some of the first landings in Antarctica that season.

Hurtigruten Expeditions’ MS Fram is named after the original explorer ship Fram, one of the mightiest expedition ships of all times and used on a series of expeditions between 1893 and 1912 – including Roald Amundsen’s 1911 Antarctica expedition where he reached the South Pole.

“These extraordinary expedition cruises will offer more bucket list destinations and once-in-a-lifetime experiences than we have ever before offered in one voyage. They will showcase some of the most spectacular nature and wildlife of our planet and offer authentic encounters with unique cultures. We proudly believe they represent the most epic voyages of modern-day expedition cruising,” said Asta Lassesen, CEO, Hurtigruten Expeditions.

“Exploring some of the most remote and unique waters of the world for 93 or 66 days, some only accessible by small expedition ships like ours, make these guests true modern explorers. These are exceptional opportunities that only very, very few people get to experience,” said Captain Terje Johnny Willassen who is one of the two Masters who will be captaining MS Roald Amundsen from Pole to Pole in the fall of 2022.

Copenhagen most wanted in 2019

New tunnel for ships in Norway