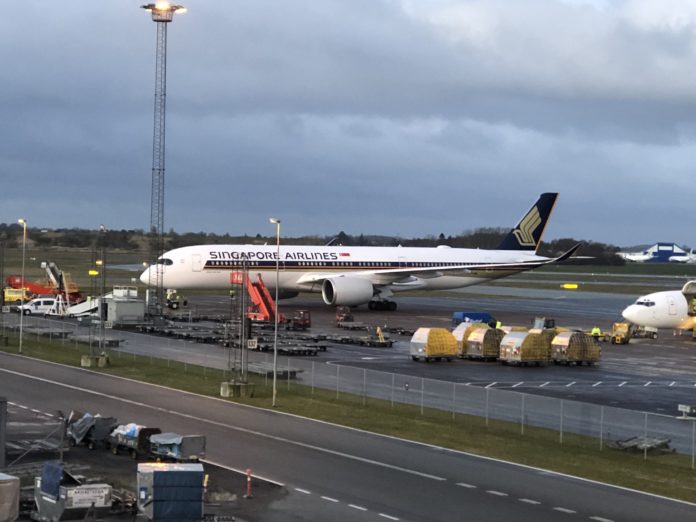 Air Transat became the first airline to receive a new aircraft from Airbus’ Hamburg facility delivered with sustainable fuel in the tank. The carrier took delivery of a new A321LRs on lease from AerCap, while a second aircraft will be delivered on Saturday. Previously, Airbus only offered sustainable fuel delivery from its base in Toulouse, France, and its facility in Alabama, US.

Airbus has reached a new milestone today with its first carbon neutral delivery of a jet from the Hamburg base. The new A321LR flew 3,115 nautical miles (5,769 kilometers), from Germany to Montreal, Canada. The fuel used was a mixture of 10% sustainable eco fuel, and standard fuel. Air Transat paid to carbon offset the emissions of the fossil fuel used, making the delivery carbon neutral.

“Sustainability and efficiency are essential for our customers and for Airbus. Sustainable aviation fuel developments will play a key role in reducing the environmental footprint of the aviation industry.

“By using sustainable aviation fuels on delivery flights with partners like AerCap and Air Transat, who are flying the aircraft from Hamburg to their Canadian homebase nonstop,

Both today’s delivery and tomorrow’s, are carbon neutral flights. This makes Air Transat the first Canadian airline to operate carbon neutral flights. The airline has also reached a deal with the SAF+ Consortium of Montreal to purchase large amounts of eco-friendly fuel. The fuel is made by converting CO2 into synthetic aircraft fuel. This type of fuel has an 80% lower carbon footprint than standard fuel.

Air Transat will use the fuel on its fleet of 17 A321neos, which are on lease from AerCap. The next-generation aircraft use 15% less fuel than standard jets. This means they are not only more environmentally friendly; they are also cheaper to run.  Jean-François Lemay, President and General Manager of Air Transat said,

“This initiative is part of our commitment to reducing our own carbon footprint while contributing to the achievement of the airline industry’s ambitious decarbonization targets.”

Airbus has been using the sustainable fuel on its transit flights from Hamburg since December last year using its Beluga cargo planes. This is its first commercial delivery using the fuel. But if the technology is available, why doesn’t every flight use sustainable fuel?

Well, newer engines might use less fuel, but eco-fuel is still more expensive than fossil fuel. It’s not cheap to use eco fuel on every flight. As rising fuel costs are already responsible for putting some airlines out of business, spending even more on fuel is not an option for many.

But switching over to eco fuels is not the only significant change to save fuel. According to the UK’s National Air Traffic Control (NATS), one of the biggest changes to fuel consumption is making better use of airspace. If fewer aircraft are left circling above airports waiting for a landing space, they are using more fuel. Last year, NATS claims it was able to save over £18.4 million ($23 million) of fuel savings for airlines by rethinking routes to avoid congestion. This equates to 113,500 tonnes of CO2 emissions.