Since the runway was extended regularity has been record high and the new terminal has enabled Vagar Airport to increase duty-free sales. The increased income base has resulted in lower airport fees and increased incentive schemes for new seasonal routes and routes going from seasonal to whole year services.

So far this year all routes are on the increase. Passenger-growth to the two destinations in Denmark, Copenhagen and Billund is some 8 per cent. Passenger-growth to Bergen is 25 per cent and to Reykjavik the growth is 10 percent. As the season to the UK and the new destination, Edinburgh is prolonged; the airport has experienced an increase of some 18 per cent. Other seasonal routes and ad hoc charters have contributed with an increase of 18 percent so far this year.

“Atlantic Airways is doing a good job, and together with the Faroese tourism industry and Visit Faroe Islands, we see that more tourists than ever before are coming via our airport. The increase is not only from Scandinavia, but passengers from the likes of Germany, Holland and France are growing in numbers”, says Jákup Sverri Kass, CEO of Vagar Airport

Vagar Airport continues to endorse new routes and approaching new operators, as this would open up the market and make the Faroe Islands more accessible for mainland Europe and the UK. 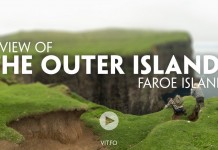