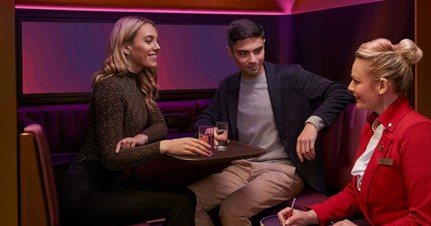 The new A350 aircraft will feature a new social space, called ‘The Booth’, which will be exclusively available to customers flying to leisure destinations.

Virgin Atlantic has announced a brand-new interior and cabin reconfiguration of its A350 aircraft, which it says is “designed specifically with holidaymakers in mind”. The changes include more seats in the economy cabin, as well as a new social space for Upper Class customers.

The new social space, called ‘The Booth’, will be exclusively available to customers flying with the airline to leisure destinations onboard the A350. Based in the Upper Class cabin, The Booth features lounge-style seating for two, separated by a table, as well as two 27-inch touch screen monitors with content to be continuously updated and tailored to the route and time of day. Initially, the screens will showcase a digital art gallery featuring up-and-coming artists, and a tail and belly cam of the aircraft. 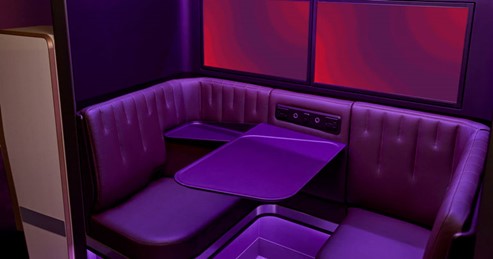 The Booth features lounge-style seating for two, separated by a table, as well as two 27-inch touch screen monitors.

Corneel Koster, Chief Customer and Operations Officer at Virgin Atlantic, commented: “We’re famous for our on-board social spaces and the introduction of The Booth elevates the customer proposition for our leisure travellers to new heights. We love creating brilliantly different experiences, which is why we’re always evolving our ideas to offer something different and exciting in the air and on the ground.

“I’m delighted that we’ve curated The Booth specifically for our customers jetting off on holiday to our sunny destinations, such as Orlando, offering a truly stylish start to their trips.”

Customers travelling between Heathrow and Orlando will be the first to experience the new aircraft, with the first flight currently scheduled for December 2021. Other leisure destinations, including Barbados, will receive the new plane later in 2022.

As well as The Booth, the A350 features the airline’s latest Upper Class suite design, which includes all window facing seats with a 44-inch pitch and fully flat 82-inch bed. All cabins on the new leisure A350 aircraft have the largest entertainment screens available on any Virgin Atlantic plane.

Denmark gets on the friendly list of India visa

The G-spot of Europe

Nothing for SAS, lots for Norwegian