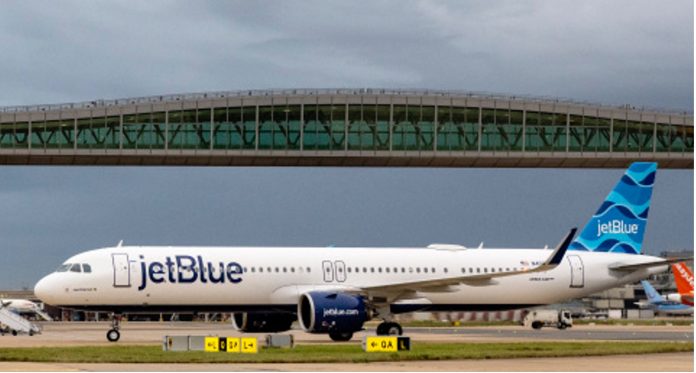 Adrunken passenger onboard a JetBlue flight from New York JFK to Salt Lake City allegedly held a two-inch cut-throat razor close to a woman’s neck, seemingly just because she chose to stop talking to him and instead started to watch a movie on the plane’s inflight entertainment system.

Merrill Darrell Fackrell of Utah has been charged with carrying a concealed dangerous weapon onboard an aircraft and assault with a dangerous weapon following the terrifying incident on Tuesday morning.

Court documents filed in federal court in Salt Lake City accuse Fackrell of threatening his seatmate with a wooden Facon cutthroat razor which he smuggled onboard the Airbus A320 aircraft in breach of TSA security regulations.

An affidavit explains that Fackrell was sitting in a window seat in row six next to a woman who was sitting in the middle seat and her husband, who was in the aisle seat of JetBlue flight B6-871.

During the flight, Fackrell downed several alcoholic drinks and engaged the woman in a “long and varied” conversation before she eventually followed her husband to the back of the plane for a bathroom break.

On their return, the woman put some headphones in and tried to watch a movie on her seatback TV despite being aware that Fackrell appeared to be talking to himself.

Without warning, however, Fackrell placed his hand over her screen and told her to pause the movie. It was at this point that it dawned on her that Fackrell was holding a blade mere inches from her throat before he jumped up and yelled: “She’s going to be ok,” and “no one needs to worry.”

Fackrell yelled at the woman’s husband, “fuck off”, to which he he reacted by sprinting to the front of the plane to get help while his wife eyed a possible escape route.

Investigators say the woman “lunged” to safety into the aisle, managing to pull away from Frackell as he grabbed her shoulder to stop her from escaping. She then ran towards the front of the plane, while another passenger sitting on the opposite side of the aisle confronted Frackell and managed to disarm him without any further incident.

The hero passenger then remained with Frackell for the duration of the flight, which, surprisingly, was not diverted. The aircraft was, however, met by law enforcement on arrival, and Frackell was quickly taken into custody.

Frackell has been remanded in custody following his first court appearance after Judge Daphne Oberg concluded that he posed a significant risk. The court heard that although he has no prior criminal history, Frackell appears to be suffering from a partially untreated serious mental health condition.

The incident is likely to raise further questions for the Department for Homeland Security and the Transporation Security Administration over the apparent failure of security officers to stop Frackell from getting a razor blade onboard a commercial jetliner.

Earlier this month, a passenger onboard a Frontier flight to Tampa allegedly smuggled two box cutters onboard the plane, which he later used to threaten a flight attendant.

Thankfully, that incident was also resolved without any injuries.

No more job cuts in path to recovery plan