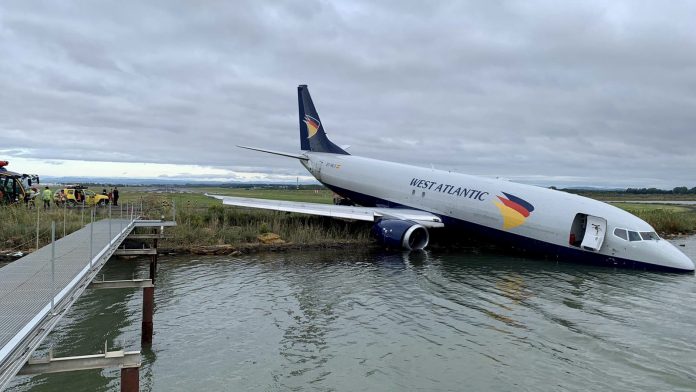 Acargo aircraft that was full of freight overshot the runway upon landing at Montpellier Mediterranee Airport (MPL), France in the early hours of Saturday morning and ended up partially submerged in a lake at the far end of the runway.

The 29-year-old Boeing 737 cargo aircraft which was being operated by Swiftair on behalf of Swedish airline West Atlantic had departed Paris for the short hop to Montpellier at 1:30 am and landed just over an hour later in the Southern French city.

The aircraft somehow overran the 2,600-metre runway and eventually came to rest around 200 meters past the end of the runway with its nose partially submerged in the L’Etang de Mauguio (a lake that sits at the bottom of the runway).

Thankfully, local officials say all three crew members onboard the aircraft were evacuated unharmed “thanks to the rapid intervention of the emergency services”.

Unfortunately, with the aircraft now stuck in the lake, authorities say they had no choice but to temporarily close the airport to all departures and arrivals until the aircraft can be extracted from the water.

The Prefecture of Herault said in a statement that a specialist removal company had been called in to help, but the airport will remain closed for the remainder of Saturday.

Luckily, the airport is not that busy at the best of times. Around 14 departures and 11 arrivals were cancelled as a result of the accident.

French accident investigators from the Bureau d’enquêtes et d’analyses (BEA) are already on-site and investigating the cause.

Wizz Air Will Resume Flights To Russia From October